Measure it, if it’s important

…and may only be interesting to people who see the power  in rigorous thinking.  If  you’re someone who likes to operate in “Just give me the answer!” you might want to skip this one!

I’ve learned about business from many amazing teachers:  One of the best is my Dad, Bill Condon.  He was the first person who trained me in measuring for things that are important.

Dad graduated from the University of Pittsburgh with a degree in Mining Engineering.  (He graduated in only 3 years, after having served in the Navy after high school, right after the end of World War II.)

After moving to California in the late 1950’s, he took a position as an Industrial Engineer at Kaiser Steel in Fontana, California.  He earned a reputation as a problem fixer, a trouble-shooter and (sometimes) a pain in the ass, as he tended to address issues head-on that others preferred to “step over.”  He brought no-nonsense common sense to situations.  He sometimes lacked political finesse and made a few enemies from this.

In 1965, he was offered a position with Hamersley Iron, an affiliate of Kaiser Steel in Western Australia, to help turn around a mining project that was running over budget.

In the early 1950’s, iron ore was discovered in huge quantities in Western Australia.  Kaiser Steel entered into a joint venture with ConZinc Rio Tinto to form Hamersley Iron.  Hamersley was specifically created to sell iron ore to the Japanese.

Huge amounts of money were invested to get the project up and running quickly, to allow Hamersley to keep its contractual agreements with the Japanese.  Time was of the essence.  The company was running hell-bent for leather, throwing millions of dollars at the project.  The commitment was to do whatever it took to get the mine up and running on time.

As reported in a publication called Mining Engineering 1967 Vol. XIX, in a chapter entitled May 1967 – Aussie Iron Ore Bounds Ahead – Hamersley on Stream, the $400-million dollar project (1966 dollars!) entailed:

…all of the above virtually from scratch, in the middle of nowhere.  The site is located about 1000 miles north of Perth, the nearest big city.

As world news, the event was not spectacular. But to mining men it represented an astonishing achievement.” (Added emphasis is mine.)

One assignment Bill was given came near the end of the project, involving the 182-mile railway:    (Note:  The next couple paragraphs likely are more than you’ll ever want to know about railroad ties, however are important to the background of the story.)  You can read more about the railroad project here:  en.wikipedia.org/wiki/Hamersley_%26_Robe_River_railway

“The rails of the railroad were connected to wooden railroad ties, called “sleepers.”  They were made out of a kind of wood, called “jarrah,” a type of eucalyptus,—really heavy and really hard—wood so dense that it would sink in water.

“The rails were in about 20ft sections.  They’d weld them together and make 1000 foot lengths.  The temperature in that area of Western Australia ranged from 70 degrees at night to 140 degrees in hot sun.  The rail could literally grow an inch in that heat!  It had to be able to slide, or else it could rip the nail right out of the tie plate.”

A purchasing agent in Perth called Bill in and said that there were 40,000 “sleepers” missing, and that they’d have to keep the plant that was processing them (in Bunbury, about 100 miles south of Perth) open for an additional two weeks to make up for the shortfall, unless the sleepers were found.  (With another two weeks of expense over the budget.)

The purchasing agent on the project mandated:  “Look into that, Bill.  We’ve checked the numbers, and based on all the numbers, from production records at mill, and the records of what was loaded on ship, those sleepers should be there (on the 200+ mile wide job site…… SOMEWHERE…in the Australian outback.)  As far as unloading, there were no records kept, but they gotta be there somewhere.”

“I drove along the full length of railroad.  From King Bay to Mt Tom Price.  I drove everywhere they could be stored, and I counted what was there.  What I counted told me 40,000 were missing.

“In doing more research and talking to the men on the project, I found out more information.  The sleepers for the railroad came by ship into King Bay Harbor from Bunbury in bundles, 5 feet by 5 feet. When unloading the sleepers from the ship, sometimes the bundles would break.  They’d take the loose sleepers and put them in a dump truck.  The trucks took the sleepers to a gully and just dumped them.

“There was a guy named (name deleted.)   He was a quantities engineer.  He was trained to survey a pile of dirt and tell you how many tons were there.

He went out and surveyed the gully with the sleepers and said “There’s four thousand there.”  I argued with him:  “There’s gotta be more than 4000.”  He said he’d take another look.  He came back and upped his estimate.  Now he said there were 6000 sleepers in the gully.

I said, “We’ll take some of the people who used to be unloading ships—they need new work.  (Another breakthrough, different story.)  We’ll grab ‘em and give ‘em a piece of chalk. They’ll start at one end.  When they’ve counted 50 units, they tell the foreman, “I have 50.”  The foreman will tally each 50.

Many of the workers on the project were from Italy.  My boss said, “But those guys can’t speak English!”

I said, “They can count in Italian!  We’ll get a guy to interpret!”

We got one quarter of the way done.  We had counted about 12,000 sleepers.  I knocked off the counting.  I called the purchasing agent in Perth and told him there were 40,000.   (By now, there was a phone from Perth to King Bay—prior there was only radio.)

So the sleepers are all in a gully, just dumped there.  We had a special tool to pick up sleepers. It was like an ice pick.  You’d pick up one end with two men on each side. You’d pick it up & stack them in 5 x 5 stacks & bundle them.

When they were done bundling them, there were over 40,000 sleepers.

The company would have had to spend another $400,000, or more, if we hadn’t counted the sleepers in the gully.

That was a fun project.”

Picture of my Dad near Hamersley, Western Australia 1966 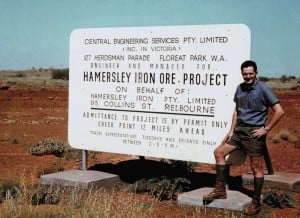 Now, what’s my point in all this?

Where in your business are you guessing, assuming, hoping?  Where do you have certainty?  Guessing and hoping aren’t fundamentally wrong.  Having certainty isn’t fundamentally right.  Business and life are risky.  (Both acting rashly and hesitating to act can have big consequences.)

How could you bring more certainty to what’s uncertain?  Where would it be appropriate to risk more and trust your hunches?

When I told my Dad I was writing about this, he added:

“Another factor is, “What’s at risk?  We had to choose whether to close that sleeper plant in Bunbury or not, in a matter of a couple of days.  If we didn’t make the right choice, it would have BIG financial consequences on the project.  I was pretty sure of myself.  I was pretty sure that the other guy’s estimate was way off.   What gave me confidence was the physical test-count that we did.  I was able to see that I was right.  I wasn’t just gambling.”

I hope you’re not being a “sleeper” when it comes to measuring.