I’m researching meeting space for seminars that Catalyst will be holding in the coming months.

Most often, when I’ve made an appointment to see the physical layout of a venue to determine its suitability, I’ve often been directed to see The Front Desk and “They’ll tell you where to go.”  My experience has usually been one of two things:  The Front Desk (what an odd name for a human) either points in the direction of the meeting room, i.e. “It’s down that hall, make a right and it’s the 3rd door on the left,” or, they summon someone from the banquets department who walks me to the room, unlocks the door, and disappears.

Yesterday, I went to the Marriott Portland Waterfront Hotel.  I’d spoken with their sales manager, Andrea, and she’d set an appointment for me with their on-site sales person, Curtis.

A few hours prior to the designated time, she emailed to request info about my car, so that she could set me up with the valet, rather than requiring me to park in a lot or on the street.  Nice touch.  Unusual.

I arrived at the hotel, the valet directed me to go thru the doors to the right and ask for Curtis, which I did.  I was directed to a seating area to await Curtis’ arrival (I was early.)  After I’d been sitting there, looking around for a minute or so, something caught my attention that was familiar, yet out of place.  I was surprised to realize that the big reader board at the entrance had my name, my company’s name and one of the company logos, right there in HD on the reader board!  At first, I didn’t even notice it, as it was “familiar.”  I see the logo all the time!  Just not in the front lobby of the Marriott.  Wow.  That’s not ordinary.  Had to get a picture of that! 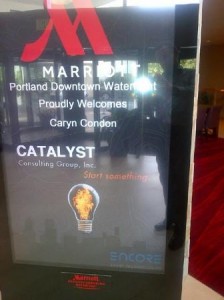 Curtis arrived promptly with a new staff person, Shadoe, who was shadowing him for training.  He proceeded to be the ambassador for the hotel, showing me several spaces and educating me about the services they offer.  Side note:  A member of the catering staff helpfully pointed out to Curtis that he could show me a meeting room that had been occupied that morning, but had just been vacated, too.  How often does that happen with banquet staff?

We completed the tour, exchanged cards and agreed to follow up.  I walked out the door, the valet RAN to get my keys.  I got in the car and there was a little bottle of fresh cold water sitting in the  cupholder and a black Marriott-branded gift bag on the passenger seat.  What’s this?  Inside was a jar of (native to Oregon) hazelnuts.  Another nice touch.

All along the way in this experience, I kept noticing the little things, the little extras.  None were loud.  None were pointed to.  No self-consciousness about it.  No cuteness.  No “See how great we are and what we did to impress you?”

What a great way to interact with a potential customer.  I was inspired.  Well done, Marriott.  You have hired great people to represent your commitments to your guests and customers and you’ve trained them well.

PS:  I had left my phone on my desk in my office.  Thank You, to J., from Switzerland, the kind man in the lobby who took the picture and emailed it to me!