Roadmap for a Bumpy Road

It takes something to replace what you’ve known, believed, and practiced all your life, with something NEW.

It can be counter-intuitive and uncomfortable.  It’s easier to turn around and do what you’ve always done.

Given the discomfort, most people don’t practice something new, unless they HAVE TO — it’s more comfortable to stay the same.

As a Business Owner, this gets in the way, sometimes with serious consequences.  It takes something to un-learn a habit.

Here’s my observation:
I START practicing something new, when something happens, something which alters the context of whatever-it-is that must be faced or confronted.  It might be:

Sometimes, that’s all it takes.

The context shifted and now I’m in committed action, committed demonstration.  The world has forever altered.
(I love it when this happens.)

Other times, there’s a problem:

I’m committed now, AND, I’m not good at this thing.  I’m not trained in this thing.  Doing this is going to take work and practice.
And I may have old habits that completely thwart and sabotage my new commitment.


I’m learning the NATO Phonetic Alphabet for use in radio communication.*
This requires that I learn the agreed-upon words that represent different letters of the alphabet.  For instance, my name, CARYN, spelled out, is,

26 letters and words. It’s not that difficult to memorize.

YEARS ago, when I was a salesperson in the Industrial Distribution business, I learned a lot of this–the wrong way.

At that time, we did most business over the telephone.  To order materials correctly, it was crucial to make sure that catalog and part numbers were accurate.  By mimicking others in the office, I learned to use words to designate letters, when communicating with vendors and customers.  The men I learned from, had served in World War Two, Korea, or Viet Nam, and they seemed to use the same words for the same letters, each time.  (Although the words were sometimes different, depending on when they’d served in the military.)  Younger guys seemed to just make up which words they used to represent each letter, as they went.

I unconsciously created my own “pidgin” where I ended up with words that became my habit.  Other times, I would choose words on the fly, simply to entertain myself and the person on the other end of the phone.  Thus, I might spell my name:  “C” like Camelia, “A” like Alphabet, “R” like Rodeo, “Y” like Yokel, “N” like Nuisance.


Now, a couple decades later, I have this bad habit.  I always MADE UP the words for the letters, or, if in a hurry, I’d go to my best and clearest “default” ones that worked, HOWEVER, those words are not the ones that follow the NATO Phonetic Alphabet.

My brain is WIRED with the old habit.  If I were to read a license plate or part number to you right now, I’d easily use my old protocols, from the past: 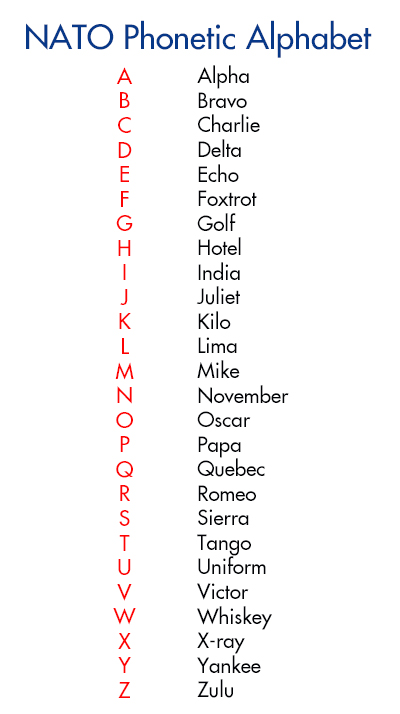 (I default to the old, <most “professional” version> of the pidjin way I taught myself:….)

NOW my commitment is to practice the NEW thing:  the Nato Phonetic Alphabet:

My Brain says, “Dang, I don’t know….  I have the new list memorized, but the old list gets in my way.  Okay, I have to THINK and CHOOSE to use the NEW list.”

T:  Uhhhh…..Tango!   (Brain has to remember this and discern it’s NOT Tom, before coming up with Tango.)

My point:  I’m finding this an interesting process.  I’m confronting un-learning that which has been my habit for a LONG time.  I keep running into the defaults of what I know, and how I’ve always done it.  I’ve been running into my auto-pilot.  It’s in the way.

To practice something new, is requiring my committed CHOICE to continue to practice and to not make myself wrong for the defaults:  rather to merely  notice them and keep practicing the new parts.  I’m playing while driving, reading off the license plates in the NATO protocol.  (Be glad you’re not in the car with me.)

It’s important to me to retrain myself.  It could save someone’s life.

I’m making it a game.

What can you turn into a game, with something that will make a difference?

* I’m training as a Portland NET.  (“NET” stands for “Neighborhood Emergency Team.”)  People on the Portland NET Team are trained as first responders in the event of disasters.  One thing a NET may do is to communicate with authorities via radio to provide information, make requests for services, communicate assessments of situations, etc.